Beard Manners have hit the ground running since they broke onto the beard scene earlier this year. I have already reviewed the Raspberry Ripple oil and this time it’s the same scent but different product. Check out my Beard Manners Butter Review. 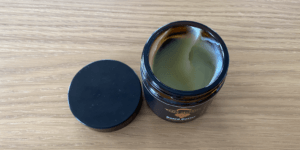 Who are Beard Manners?

Well, you can read more about them by checking out my Beard Manners Raspberry Ripple Review. Jason has become a huge part of the community since he launched Beard Manners and has recently joined the UK Beard Portal as part of the committee. He has been a massive supporter of the Portal since day one and he is a fantastic addition.

Before I start with all the technical stuff, let me explain something. I will not be scoring the butters, at least not yet. I want to delve into them, give my opinion and then move on to the next one. There will be different sections to the oil reviews but the main points will be the same.

Once I’ve tried and reviewed all the butters that I have I will then rate them as per usual. Then and only then, can I declare which butter is the best on the market.

Let’s get on with the Beard Manners Butter Review.

The scent has already been described in the review of the oil, but I shall do a quick copy and paste so you can read it again!

Raspberry and Vanilla……need I say more, is the tag line for this oil. Does he need to say more though? Well, you can definitely smell the vanilla. No doubts about that. You also get a sweet smell
which is very pleasant but I don’t really get the raspberry scent. Don’t get me wrong it smells very nice but try as I might I couldn’t define what it was that I was smelling other than the vanilla.

I normally have a good nose for things and can pick out a lot of scents. I’m not saying that out of 5 different fragrances I could pick out every single one. That would take a nose that could smell a fart from 100 miles away. The raspberry just didn’t explode in the way I had hoped it would. Still, it was a very pleasant scent!

I was getting 6 hours out of the oil but the butter didn’t quite hit that. It wasn’t far off at around four and a half hours which is decent from what I’ve experienced so far. The scent started to fade around the 3 hour mark but hung in there for that bit extra.

It would be good to leave in overnight if you put it in a couple of hours before hitting the hay. For me, I loved using the butter during the day. It made me start to wonder if I even needed to use oil 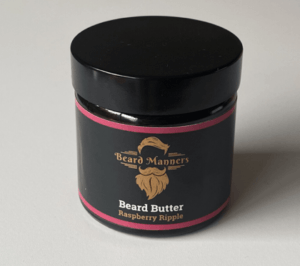 This is so beautifully soft, it just melts in your hand. Like good butters should, it turns into more of a liquid quickly. This is a poured butter but it almost feels like it’s been whipped. The texture is as smooth as velvet and it covers the beard well. There is a bit of weight to it as well and it sits on the beard for a bit longer giving a lasting protection which you don’t always get.

There are 2 factions with butter lovers. The whipped fans and the poured fans. Some people will only buy whipped butter but for me it doesn’t matter wether it is whipped or poured. The most important thing to consider is if it is any good or not.

Just like the oil, Beard Manners butter contains the same fantastic carriers. These all work extremely well together and keep the mane nourished for the entire working day. That’s eight and a half hours, with a break in between of course, making it about nine and a half hours overall!

The butter took a bit longer to penetrate through and get to the skin which is probably why my beard felt nourished for longer. Let’s have a look at which carrier oils and butters are used.

This is another oil that is great for both your skin and hair. Almond oil can help soothe and improve acne, especially good for when you first start growing a beard. It also treats dry skin which you can get under your beard if you don’t use the right products. There is plenty of vitamin E in this oil which is good for protecting and even repairing your skin from sun damage. For your hair, there is plenty of B-7 or Biotin which is great for keeping your whiskers strong and healthy.

Argan oil is known to be beneficial to your skin and can help to moisturise your skin and hair. Hailing from the Argan Tree, which is endemic to Morocco, it is also used as a dip for bread etc. It is often used in face creams due to its potential to reduce wrinkles.

This is a great carrier oil for your skin. It claims to hydrate and moisturise as well as calm itchy skin. It doesn’t appear to have any benefits for you hair though but there are other carriers that do that. Avocado isn’t as widely used as the other 5 oils in the set which is a good thing.

Castor oil is rich in ricinoleic acid, a monounsaturated fatty acid. This really helps to mousturise and hydrate the skin under your beard which can be difficult to do, especially with a big beard. It can also help to reduce acne which can appear when you first start to grow your beard.

The main benefit for your beard is in helping to reduce beardruff. This is when your skin gets itchy and flaky, similar to dandruff. Castor oil will also lubricate the hair shaft which helps make it stronger and less susceptible to breakage.

Grape seed oil is rich in linoleic acid, a polyunsaturated omega-6 fatty acid. Essential fatty acids are the building blocks of healthy cells. They hydrate, moisturize, and soften skin. It absorbs into your beard and skin quickly as it is very thin and doesn’t leave you feeling greasy.

Jojoba oil is derived from the seeds of the jojoba shrub, a perennial native to the North American deserts. The oil of the jojoba seed is extracted by cold-pressing, a process that helps maintain the rich nutritional value of the oil. The oil has plenty of antioxidants including vitamins A and E.

These help to stop or reduce itchiness of the skin. This is particularly helpful in the early stages of beard growth. It is also great for your beard hair as the oil molecules are similar to sebum. It can also help to make your hair stronger which is very helpful when you brush or comb your beard a lot.

I can’t really add anymore to this than what I have said on my Beard Manners Raspberry Ripple Review so check that out!

This is a fantastic butter. It has everything you would want and need. It smells good, it’s soft and creamy and it gives you long lasting nourishment for your beard. Jason at Beard Manners has really hit the jackpot with his butters and I can’t recommend them enough. Is this my favourite butter? It is still too early to say but I fully expect it to be up there when I draw this series to a close.

If you want to get yourself some of these butters then click the link below to get to the website. Jason has also given me a discount code for you guys to use and save yourself some cash! Just put TBB15 in at the checkout and the discount will be applied. What are you waiting for?

Thanks for reading my Beard Manners Butter Review. If you have tried any of their butters before then let me know what you thought of them in the comments below. There’s more to come this week with a Wednesday special and the return of my Friday blog. Next Monday will be the Runesilk Dark Night review.

become a member of the bearded brit

This website uses cookies to improve your experience while you navigate through the website. Out of these cookies, the cookies that are categorized as necessary are stored on your browser as they are essential for the working of basic functionalities of the website. We also use third-party cookies that help us analyze and understand how you use this website. These cookies will be stored in your browser only with your consent. You also have the option to opt-out of these cookies. But opting out of some of these cookies may have an effect on your browsing experience.
Necessary Always Enabled
Necessary cookies are absolutely essential for the website to function properly. This category only includes cookies that ensures basic functionalities and security features of the website. These cookies do not store any personal information.
Non-necessary
Any cookies that may not be particularly necessary for the website to function and is used specifically to collect user personal data via analytics, ads, other embedded contents are termed as non-necessary cookies. It is mandatory to procure user consent prior to running these cookies on your website.
SAVE & ACCEPT